I am one of the top steelhead river guides around the great lake’s region and I recommend 3 methods that would be considered the best way to catch steelhead, but it depends on the type of river that you fish.

What Is The Best Way To Catch Steelhead In Rivers?

The best way to catch steelhead in rivers is float fishing with a Centerpin reel because it allows you to get longer controlled drifts while keeping your bait in the strike zone for longer. The slower presentation when float fishing also increases bites and the float improves your strike detection.

But, Centerpin float fishing is not always the best method, and different river conditions might require different methods.

Under certain river conditions, there are other ways that will work better than float fishing and you should know what they are so that you can be flexible and catch steelhead under any conditions.

Changing from one method to another has allowed me and my clients to catch a lot more steelhead.

I will discuss some of these methods below and provide my opinion on what methods are best to try under different conditions.

Float Fishing – 3 Ways To Do It

You don’t actually need to float fish with a Centerpin. You can also do float fishing with a spinning reel or with a baitcasting reel. However, in my experience, the Centerpin reel is a much better reel to use if you want to maximize your success when float fishing and is the best way to catch steelhead most of the time.

So what’s the deal with a Centerpin reel being better than a spinning reel anyways? I have had the opportunity to do both, as well as guide with both, and then compare both methods side by side many times over.

When compared side by side, and when both anglers are equally skilled and using the same baits, the Centerpin reel is always more effective than the spinning reel.

The simple reason for that is the Centerpin’s ability to control the line coming off the reel which provides a much better presentation.

Presentation is the key to catching more steelhead.

Controlling the line coming off the reel means you get a smoother more controlled drift so your float is not jerky and bouncing. A jerky bouncing float also means a jerky bouncing bait and that’s not-so-good.

A controlled drift also means that your float is not dragging and then floating too fast, and then dragging over and over again. Your float speed and your bait speed should always be controlled and this will greatly increase you hookups.

The line coming off the spinning reel is not consistent and it’s more difficult to get a perfectly smooth and controlled drift while controlling the speed of your float and your bait, which often means less fish.

I have yet to see a spinning angler do this as well as you can with a Centerpin reel.

With a spinning reel sometimes, you need to pull the line off by hand because it sticks, other times you need to slow the line down with your hand and there is no real easy way to do this.

Controlling your speed which is what I consider to be 1 of 4 fundamentals to expert float fishing and it can mean the difference between catching 10 steelhead or none.

Speed control is the number 1 thing that I recommend that every float fishing steelheader needs to learn. The Centerpin controls the speed of the line, float, and bait much better by simply applying a little bit of pressure to the rim of the spool.

You can my 4 float fishing fundamentals on my page Centerpin Fishing: An Expert Centerpin Guide Explains It.

Depending on the river conditions different methods might work better than float fishing, so keep reading.

The thing I like about the Centerpin reel is its ability to let the line come off the reel freely as the float pulls the line and spins the spool for you.

You can actually do this on a baitcasting reel if you push the button down and free spool the reel and then use your thumb to control the speed.

This is the only time I might consider using a baitcasting reel.

In general, aside from the benefit of the baitcasting reel being able to cast further than a Centerpin reel, the Centerpin reel is often still the better option for float fishing on almost all rivers and it’s still the best way to catch steelhead.

The Best Way To Catch Steelhead In Large Rivers

In larger rivers that have longer deeper pools, it’s often best if you can make a long drift to cover the water better. This is where a Centerpin reel and float fishing is the best way to catch steelhead in rivers.

The Centerpin reel can allow you to drift a float and a bait as far as you can see your float which could be over 200 feet.

If you know how to read the water, find the bottom so you are not way over the fish’s heads, and you know how to cover the water, and then control your speed, you have a greater chance of catching more steelhead on larger rivers with a float fishing and a Centerpin reel and this makes the Centerpin reel the best way to catch steelhead on larger rivers.

The Best Ways To Catch Fish In Medium Sized Rivers

As long as the spots on a medium size river are 3 feet or deeper and they are longer than 6 feet, the float fishing method is still the best way to catch steelhead.

Medium-sized rivers like the one in the picture above are the ones that most great lakes anglers would be fishing.

However, some of these medium-sized rivers will also have shallower sections and will also have some pocket water and that is not good water for float fishing. If you are versatile and can switch methods, you could do well in both types of water.

The Best Way To Catch Steelhead In Shallow Rivers And In Pocket Water.

As I just mentioned, shallower water and pocket water are not good for float fishing. You could probably tweak your leader set-up and shorten up your drifts in this kind of water just to make it work, but there are better methods.

Bottom bouncing and fly fishing using the tight-line or Euro nymphing methods are the best way to catch steelhead in shallow water and in pocket water.

With these methods, there is no float limiting your depth which means you could fish for the steelhead sitting in 1 foot of water.

The problem for most anglers is that they don’t know how to fish this type of water so they just never fish it.

I have had many days both in the spring and fall when I and a buddy, or one of my clients catches 10 times more fish than everyone else on the river simply because we were able to change tactics and fish the shallow spots and ignore bigger pools where everyone else way fishing.

Oftentimes, 90% of the fish will come out of shallower water and in spots that are only 3 or 4 feet long and only a couple of feet wide. I call these pockets.

I tell guys that, sure, there might be 20 steelhead in the bigger pool up the river where all the other guys are fishing, but if I can pull 1 steelhead out of every 10 tiny spots that I fish, and I fish 100 tiny spots over a day, that’s 10 steelhead that probably haven’t seen a bait.

It’s not uncommon in some rives to pick up single steelhead sitting in small pockets or depressions behind, beside, or in front of rocks. I also find steelhead in tiny, almost unnoticeable spots in the middle of faster shallow water.

I have had days where a friend and I landed 25 steelhead while every other angler is getting 0 to 3 steelhead, and the difference was that we didn’t fish any of the bigger pools where those other anglers fish.

For fishing in this type of water, it’s wise to learn how to do my advanced bottom bouncing technique which can be done with any reel. For more information on bottom bouncing methods check out my page Bottom Bouncing – 5 Proven Guide Tips For More Fish

Another great method for shallow pocket water, you should learn how to do my Euro Nymphing method.

I will be updating this site with more information on my Euro Nymphing methods soon. Check out my page on Fly Fishing to see those posts.

The Best Way To Catch Steelhead In Small Rivers

Small river fishing for steelhead will depend on the type of water you are fishing. In small rivers that are fast and shallow like the one in the picture, you will better off fly fishing or using the bottom bouncing method which is the best way to catch steelhead in this type of water.

On smaller rivers that might be slower and deeper or that have a good-sized pool around every corner, float fishing is probably going to be the best way to catch steelhead, but being able to adapt to different conditions is best.

The Best Way To Catch Steelhead In Slow Water

One of my favorite rivers to fish is a slow river with lots of flat water and lots of spots between 4 and 10 feet deep.

Many anglers struggle to catch a lot of steelhead in this type of water because it’s so hard to read the water and figure out where to fish.

A float allows you to find deeper spots in the river where the fish will hold. I discuss finding the bottom on my page Centerpin Fishing: An Expert Centerpin Guide Explains It

Float fishing in slow flat water is the best way to catch steelhead because the bait is presented at the right speed for this type of water.

Is Lure Fishing The Best Way To Catch Steelhead

In some cases when the steelhead are all very aggressive, lure fishing can be the best way to catch steelhead when river fishing simply because you can cover the water faster.

However, these times when all the steelhead a very aggressive are few and far between, and being able to change to something other than lures can pay off.

Lure fishing only targets the most aggressive of the steelhead which might mean only 1 out of every 10 steelhead might be willing to chase and grab a lure.

Float fishing is a slow presentation and has the advantage of catching steelhead that are both aggressive and less aggressive which often means the best way to catch steelhead will be to float fish for them.

Got A Question About The Best Way To Catch Steelhead?

I hope you liked my page and learned something about the best way to catch steelhead, but if I missed anything or you would like to ask a question just let me know in the comments section below.

You can also watch me and the guys from The New Fly Fisher TV Show fishing for spring steelhead on Youtube.

I am a professional full-time river fishing guide with over 20 years of guiding experience and I am considered one of the top river guides.
As one of the top river guides in North America, I have guided and taught about 3000 anglers as well as other fishing guides. I'm often on the water for over 250 days a year guiding and teaching someone how to fish for trout and steelhead.
Check the About Us page in the bottom menu for more about me and our other river guide contributors. 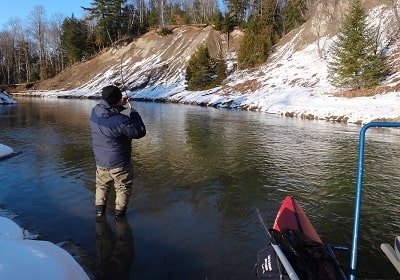 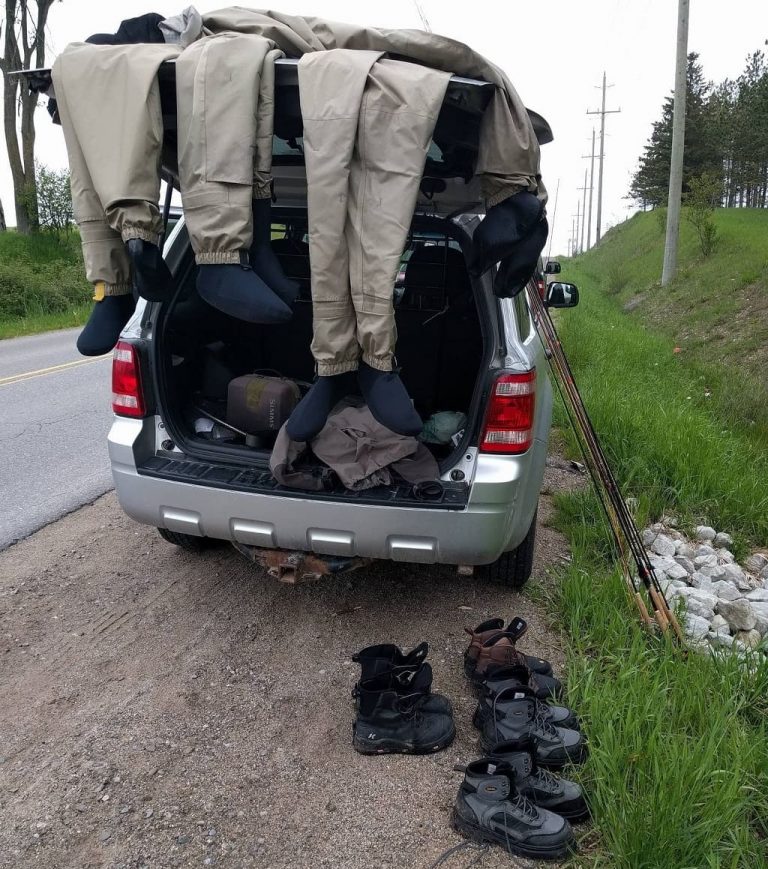